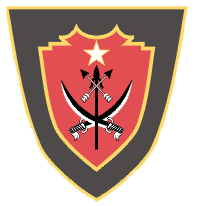 The Timor-Leste Defense Forces (FALINTIL-FDTL) were created through regulation of UNTAET (United Nations Transitional Administration in (UNTAET / REG / 2001 /) dated 31 January 2001. Based on a study prepared by King’s College in London entitled Independent Study on Security Force Options for Timor-Leste (2000) and a proposal from the National Timorese Resistance Council (CNRT), with the support of some countries donors The United Nations has decided to create the FALINTIL-FDTL with the mission to provide a military defense of its territory and its people, as well as to provide assistance to the civil community.The option chosen was the so-called “3rd Option” of that study, which pointed to a light infantry force of 1500 men and 1500 reservists with an organization that included a joint command, a Regular Forces component consisting of two light infantry battalions and a naval component, plus an instruction center and a logistical base and a Reserve Forces component. The initial training took place in Aileu, the last cantonment of the FALINTIL, and the selection and recruitment process began around 1700 FALINTIL volunteers.

Approximately 650 were assigned to the 1st F-FDTL Battalion, to the naval component, elements to the General Staff and to the Formation Unit that was to be stationed in Metinaro (Center Instruction Commander Nicolau Lobato).Some donor countries such as Australia, South Korea, New Zealand and Portugal contributed to this initial training, which, in addition to specialized selection and recruitment staff, contributed equipment and materials and started to build some infrastructure (CICNL) and went through Portugal, donated two boats of the class Albatroz that would be the embryo of the Naval Component. The training began on January 29, 2001 in Aileu. In the first phase, 250 guerrillas were selected and had participated training course for became the officers and sergeants. A Group of 66 officers and 124 sergeants were then created. In a second phase already in Metinaro, the formation of about 400 soldiers destined to the category of squares was realized.

It should be noted that initially the Naval Component received 60 of the 600 military personnel initially formed. After its creation, the 1st Battalion of the F-FDTL would be engaged in the eastern tip (Lospalos). The King’s College study was the F-FDTL’s initial strategic orientation document. However, in 2004 the F-FDTL Commander Taur Matan Ruak formed a task force to prepare an F-FDTL development strategy. The Force 2020 report was completed in 2006 and was made public in 2007.

This study has served as a basis for the development and consolidation of F-FDTL in the current structure. According to this study, the F-FDTL are now organized in a Headquarters, five components, Land, Naval, Air (to raise) Service Support and Education and Training and two independent units, the Military Police and the Falintil Unit.However, it is important to highlight some initiatives that have focused on the Security Sector Reform in Timor-Leste, which included the organization of various seminars, the involvement of Timorese political-military leadership, which, with the support of the UN and some donor countries, sought to improve security and defense.

Despite the seriousness of some crises, namely the one experienced between 2006 and 2008, which has led to the removal of about 600 military personnel, a path has been pursued that seeks to develop F-FDTL as a credible, professional and conventional force with be able to act in the whole spectrum of conflicts. It should be noted that, in carrying out one of the missions that have since been assigned to it, the F-FDTL have already participated in two peace operations, one in Lebanon, where it participated with a force of 11 men from the Engineering unit and in South Sudan where over the course of three years, nine military officers there carried out military observer missions. The F-FDTL commanders have so far been:

a. A true structure of F-FDTL is defined in Decree-Law no. 15/2006, of 8 November, Organic Statute of FALINTIL-FDTL.

b. The F-FDTL’s mission is defined in the Constitution of the RDTL, the National Defense Law and the document cited above (Organic Statute). Thus, in general, one can say that an F-FDTL mission develops according to the following vectors:

• Military defense against any external threat in any form, guaranteeing the national independence, the territoriality, the freedom and the security of the population, in compliance with the constitutionals order.

• Support to other the security forces and civil protection authorities within the Integrated National Security System and when the Joint Operational Commitment is decided.• Support to the population, both in terms of meeting basic needs and improving the quality of life of the population.

• Support to the state’s foreign policy, through actions of Technical-Military Cooperation, participation in Peace and Humanitarian Support Operations and others that may be determinated under international agreements.

c. The F-FDTL obey the competent organs of sovereign, under the terms of the Constitution and the law, are nonpartisan and a unique organization for the whole country. As F-FDTL is part of the direct administration of the State, through the Ministry of Defense. d. The structure of the F-FDTL comprises:

• The General Staff of the F-FDTL;

• The military organs of the Command of the Armed Forces;

• Component Commands; e. In the General Staff is in the Support Groups of the CEMG, responsible for ensuring the activities of the F-FDTL in the areas of Justice, Finance and Procurement, and the Coordinating Staff, which are the main planning organs to design and support the decision of the CEMG.

f. The organization of the F-FDTL also comprises the Components and Units, as follows:

• Component of the Light Naval Force;

g. The structure of the F-FDTL comprises an operational structure, comprising the set of forces and means of support and a territorial structure constituted by the organs and services necessary for the general support of the F-FDTL.

3. COMPETENCES OF THE CHIEF OF STAFF